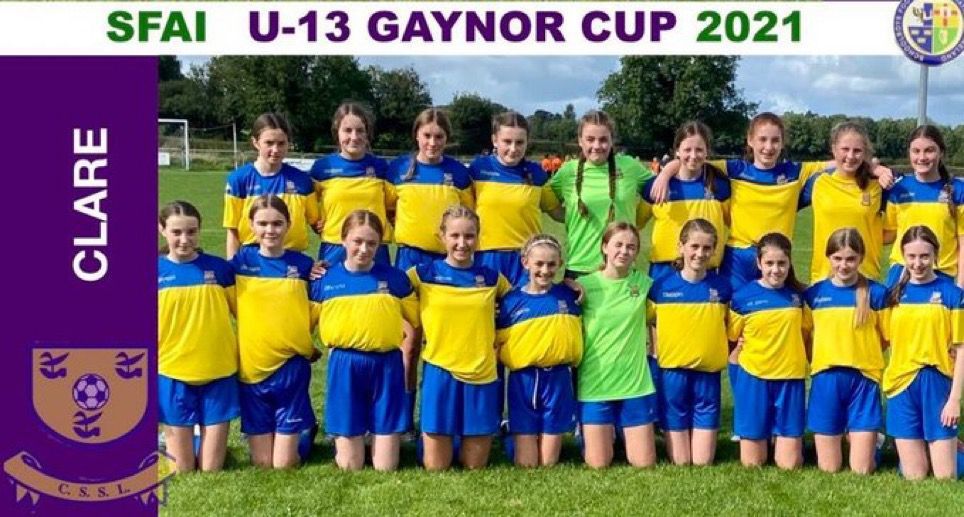 Published:  about 1 year ago

Clare faced South Tipp in Tipperary Town on 28th November in their Gaynor Shield Quarter Final. Clare got off to a good start dominating the first 10 minutes of the game. They came close to scoring with Shannon Cagney hitting the post but after that attempt South Tipp got more into the game and Clare had to hold strong defensively. South Tipp got close to scoring a handful of times but due to great goalkeeping from Rhiann Murphy and the strength of our back line of Aibhlinn Cotter, Ava Richter, Emily Carmody and Maeve Clancy they were kept goalless. Clare took the lead right before halftime with Saoirse Kent scoring our opening goal.

Clare kept up the intensity in the second half. Our second goal came from Rachel O’Shea followed by a third from Mary Kate Cregan, who scored a well deserved first goal of her Gaynor campaign. The midfield line of Rachel O’Shea, Orla Cahill, Saoirse Kent and Kate Jones worked hard to keep possession and not let South Tipp back in the game. We added to our score with Rachel O’Shea scoring her second of the game. South Tipp got one back in the dying minutes of the game when they were awarded a penalty for a handball inside the box.

Clare emptied their bench to maintain momentum and all played brilliantly when they came on: Nessa Meaney, Emma Riordan, Sarah Hickey, Leah Leahy, Carragh Fitzgerald, Emily Singleton and Kate Lee playing their part. The performance was that strong, management felt they needed to pick two players of the match – Mary Kate Cregan and Rachel O’Shea. They now face Waterford in Ferrybank next Sunday in the Semi Final.

Clare finished second in Group B and were unlucky not to finish higher with a loss to Galway in a game that they could have won costing them top place in the position.

North Tipperary scored their goal in the first couple of minutes with a great strike from outside the box. Clare soon found their rhythm and their goal came about midway through the first half. Shannon Cagney's industry in pressurising the defense and the keeper resulted in in an own goal. Both sides were creating chances but neither were able to capitalize on them. Under pressure again in the second half, brilliant goalkeeping by Ciara Lohan and a strong defense kept North Tipp at bay. Towards the end of the second half both teams had a number of good chances with Rachel O’Shea, Emma Riordan and Sarah Hickey very unlucky not to get a goal between them. Although both teams had close chances the game finished 1-1.

Clare started the game under pressure with most of opening minutes spent with the ball in Clare’s half of the pitch. They settled into the game as the half wore on and were much more confident in the second half constantly getting into Longford’s box. Nearing the half way point of the second half the girls hard work finally paid off with Nessa Meaney playing a clever pass to Aibhlinn Cotter who scored a phenomenal goal into the top corner. Some excellent goalkeeping by Rhiann Murphy in the dying minutes lead Clare to their first victory in the Gaynor Cup.

Super first half for Clare as they kept Galway at bay and were unfortunate not to score themselves. Shortly after the second half began, Clare were the first to get on the scoresheet with Rachel O’Shea scoring a brilliant goal. However, they dropped their guard and Galway got one back straight away and scored again in the last few minutes of the game. Overall very good performance unlucky to come away with a loss.

Good performance by Clare. All 17 players that got on the pitch tried their best. In good form and getting on the scoresheet was Shannon Cagney, Molly Cox (2), Maeve Clancy, Saoirse Kent (2) and Rachel O’Shea

So Do You Think You Know Your Sports ? An exciting Club and County Fundraiser released by Clar...

Refereeing is an enjoyable and rewarding experience.With plenty of support and mentoring availab...